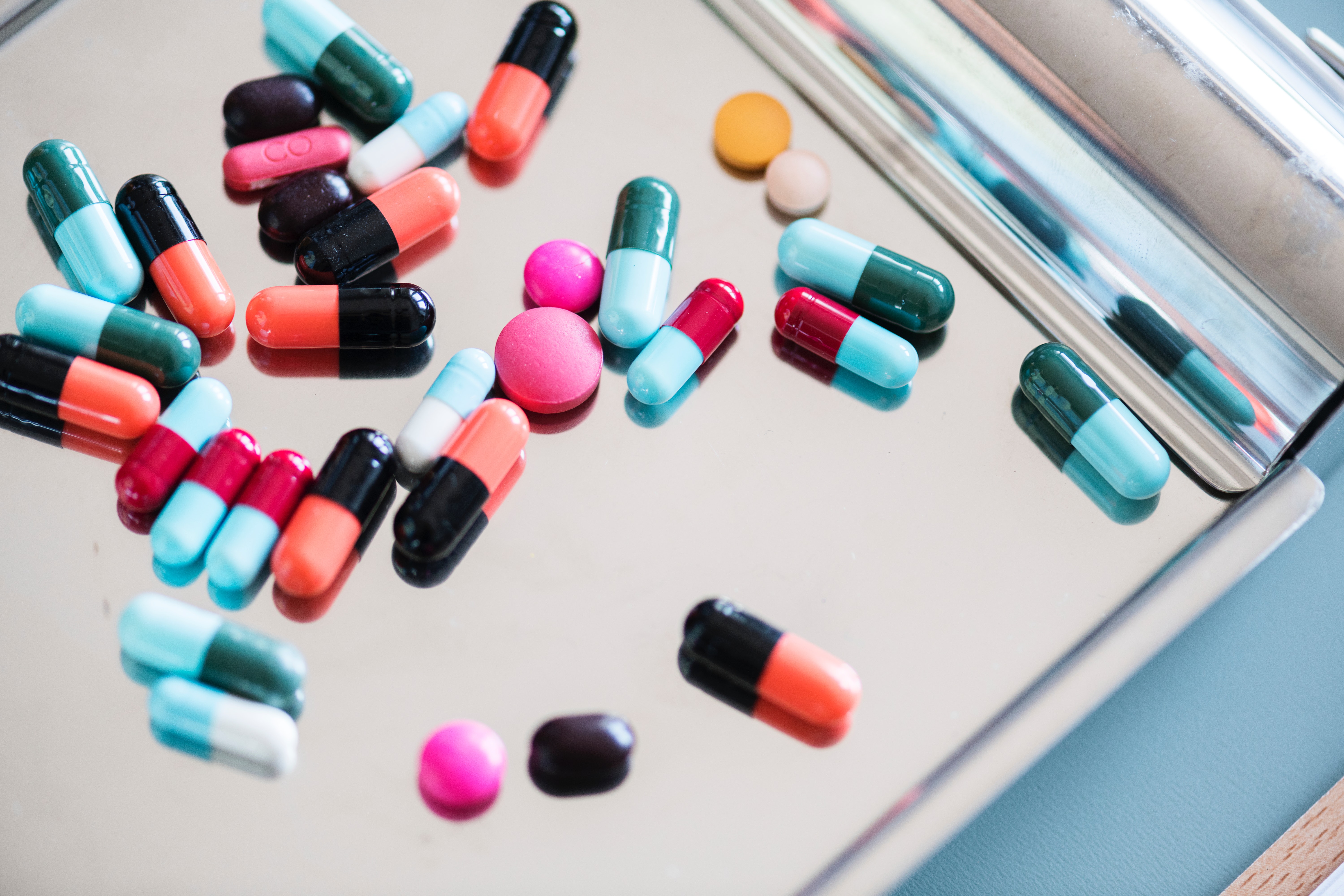 Antibiotics are a great thing and it’s undeniable that they’ve saved countless millions of lives since penicillin was first introduced in the 1920s. However, it’s equally apparent that we’ve become far too reliant on this class of drugs. Trying to find effective natural antibiotics however is an alternative that deserves a second look.

Traditional antibiotics have been widely over prescribed and this abuse has led to the evolution of antibiotic resistant microbes including resistant staph and totally drug resistant tuberculosis.

This overuse of antibiotic medications for even minor infections is also thought to be responsible for the growing number of autoimmune diseases and GI issues. Even a single course of antibiotics can completely upset the natural microbial balance of the digestive tract, causing problems which can persist for years. Basically, antibiotics should be used only when they are absolutely necessary.

So what are the alternatives and how do we use them to help simple bacterial or viral infections? There are tons of natural alternatives you probably have sitting around in your kitchen. From honey to vinegar and a number of herbs, these items deserve a try. Read on below to find out more about these effective natural antibiotics and how they work.

What are Natural Antibiotics?

So what does the term “natural antibiotic” really mean? Well, it is used to describe plants, herbs, or other natural substances that display very strong antimicrobial properties (meaning they can help fight viral, bacterial, fungal, or even parasitic infections).

It’s important to know that these natural antibiotics have limitations and aren’t always the right solution. As with any infection, it’s highly important to talk to your physician and never self-diagnose and treat yourself.

While antibiotics do have their place in medicine, why not think about reaching for a natural solution when you can?

Oregano is good for much more than cooking; this common culinary herb also has potent antibiotic properties. Look for oregano oil which has a strong odor and is golden or dark yellow. Oregano oil can be used in a number of ways to help treat infections.

Remember that like most other essential oils, oregano oil should always be diluted before using. For sinus infections or sinus inflammation, you can add a few drops of oregano oil to a bowl of hot water and inhale the steam.

Add a few drops of water to a basin of water and soak your feet or hands to treat foot or nail fungus or apply topically after diluting a drop of oregano oil in a teaspoon of olive or almond oil.

It can also be taken orally when diluted as directed above – place the oil under your tongue and hold it in your mouth for 2-3 minutes before rinsing out your mouth. This can be done four or five times daily to treat systemic infections.

Cayenne and other chili peppers have antibiotic and analgesic properties which have made them part of the natural pharmacy for centuries. Essential oil from cayenne peppers is an effective treatment for a number of bacterial infections.

It can also be used to treat strep throat and a variety of other minor issues. Remember to dilute this oil well if using topically to prevent burns. You can also add hot peppers to your food to give your immune system a boost.

Grapefruit seed extract has been studied for its antibacterial properties. Some studies have shown it to be as effective as currently available topical antibacterials.

The extract seems to be more effective on gram-positive bacteria than on gram-negative bacteria, but has a wide spectrum of applications.

Grapefruit seed extract can be used topically, but if you plan to use it internally, you should make your own by grinding grapefruit seeds and mixing with glycerin. The reason is that some commercially available extract can often contain potentially problematic ingredients.

Silver has long been known to have antibacterial properties. In fact, it’s effective on a wide range of harmful microbes, including some which are resistant to conventional antibiotics. Its a good option as it work without having as harmful of an effect on beneficial bacteria in the GI tract.

However, since it can still kill beneficial bacterial, its best to use caution when taking colloidal silver internally too often. Externally, it can be used to treat ear infections, eye infections and to gargle with for throat infections. I have found great success with this colloidal silver from Amazon. 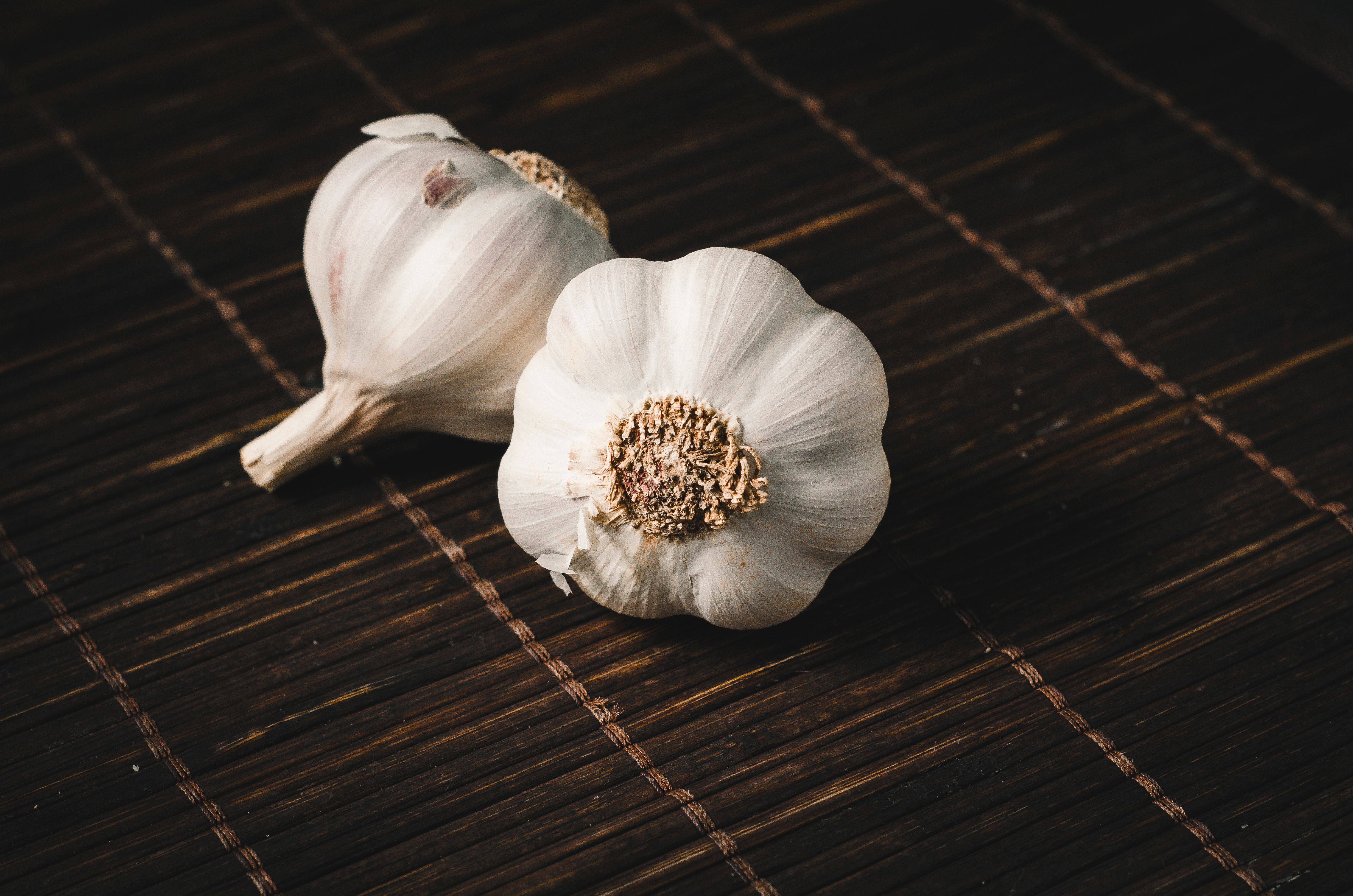 Garlic is one of the most potent and useful natural antibiotics around. Not only does it kill pathogenic microbes (including fungi and viruses as well as bacteria), it works without hurting beneficial bacteria and upsetting your digestive system’s microbial balance.

As far as natural antibiotics, garlic also offers a wealth of other health benefits. It can help remove heavy metals like cadmium and lead from your body, kill parasites, offers antioxidant properties, improves digestion and also provides a wide variety of nutrients including vitamins, minerals and beneficial phytochemicals.

If it’s not already, garlic should be a regular part of your diet and when you’re trying to fight off an infection, experts recommend eating an entire bulb of garlic daily. Your partner might not be too happy, but you will be when you start to heal quick.

You can also apply garlic infused oil topically for ear infections and other minor infections. Just crush 1 clove of garlic in 1-2 tablespoons of olive oil and allow the mixture to steep for 30 minutes before straining out the garlic. Use a few drops in the ears hourly to fight off ear infections. It’s safe, effective and can also be used as an earwax removal aid.

Fresh ginger has been proven to be effective against bacteria including listeria, salmonella and campylobacter which are common culprits in food borne illnesses. This may be part of the reason that it’s long been a traditional accompaniment to sushi.

Raw, pickled ginger seems to have the most potent effects; you may want to make it a regular addition to your diet in order to benefit from its antibacterial properties.

This close relative of ginger has long been a staple of both Ayurvedic medicine and South Asian cuisine. It’s a very effective natural anti-inflammatory and immune modulator as well as having antibacterial properties.

Turmeric extracts have been found effective against H. Pylori (the bacteria responsible for many ulcers) in studies. For the best results, it’s recommended to take turmeric extracts (curcumin) in 400 – 600 mg dosages three times daily. You can also add turmeric to your cooking; it’s always nice to have an excuse to eat more curries!

Dutch researchers have found that elenolic acid, which is a component of oleuropein, acts as a broad spectrum antibiotic, antiviral and anti-fungal agent. The recommended dose of olive extract is 1000 mg capsules three times daily with meals. 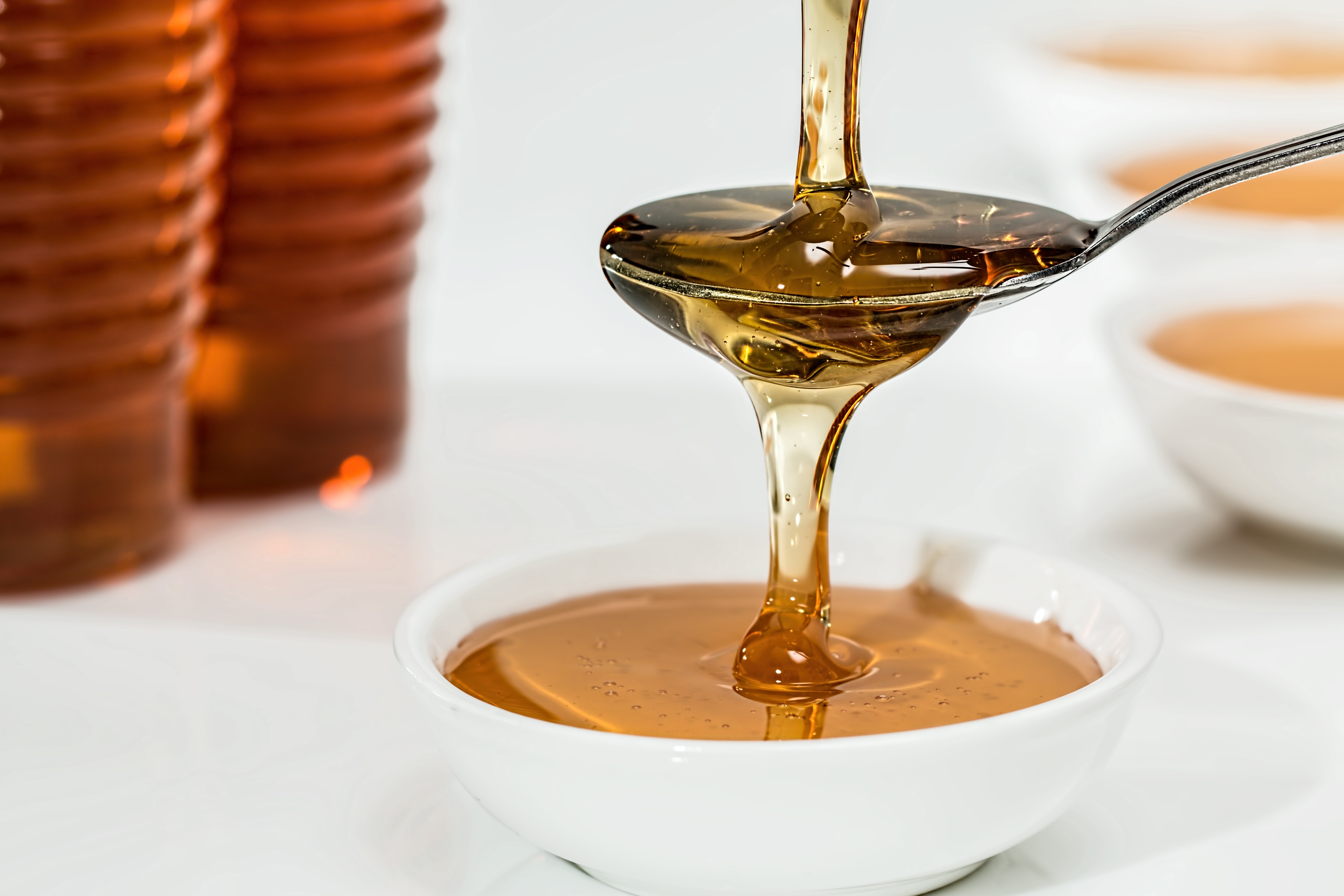 One of the top natural antibiotics, honey has been used as both food and medicine for millennia. You want to make sure that your honey is completely raw and has never been heated. Manuka honey from New Zealand is considered to be the most effective at fighting infections, but local raw honey is also a good choice.

Manuka honey has been extensively studied and has found to be effective against MRSA, H. Pylori and over two hundred other bacterial strains, including many drug-resistant strains. Manuka honey has also received FDA approval for use in wound dressings. You can buy New Zealand Manuka honey from Amazon now.

Apple cider vinegar is good for a lot of things other than making salad dressing, including treating minor infections.

Raw, organic apple cider vinegar is a potent natural antibiotic and all around antimicrobial. It can be used topically as an antiseptic and according to some studies, it may even help you to maintain a healthy weight! Mix 2 tablespoons into 8 oz of water and drink after meals.

Just like garlic, it’s cousin in the lily family, onions contain the antimicrobial compound allicin which can help to fight infections. You can use onion in the same way as garlic as well as including more of it in your diet. It is more effective when eaten raw but slightly cooked will still provide benefits if you can’t manage the strong flavor.

Eucalyptus oil is probably better known for its antiviral properties (it’s commonly used as a home remedy for fungal infections of the skin and nails), but it’s also an antibiotic.

You can use it in the same ways as oregano oil or other essential oils – just remember to dilute it with a neutral carrier oil like olive oil or almond oil before use. 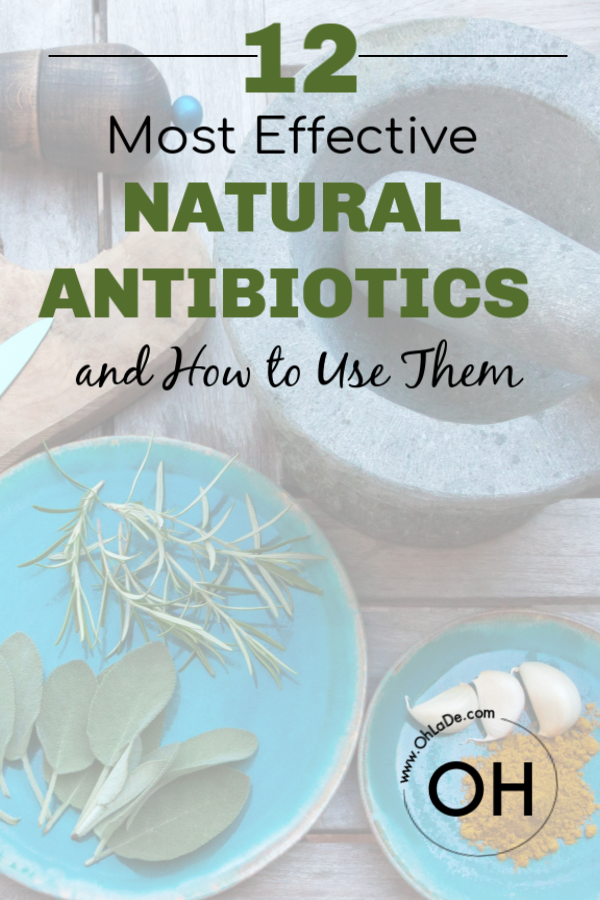 Previous Post: « 18 Adorable Easter Bunny Cakes to Inspire You this Season
Next Post: The Best Warm Artichoke Dip Recipe You Will Ever Try »