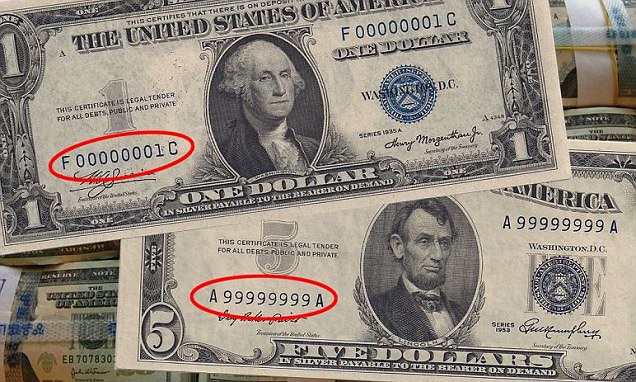 The value of a dollar these days might not be as great as it was back in the 1960s or earlier, but its possible that what’s in your wallet could be worth far more than the numerical number on a piece of paper. Hundreds and thousands of rare dollar bills are floating around the US. These are not just bills from early 1900s either, they include misprints from as early as this year. So it’s worth a few minutes to check your wallet or secret stashes for those unique bills.

So which dollar bills have more value than others? It comes down to serial numbers, misprints, and in some cases, age. Prior to 1928 bill size was larger than it is now so its much more obvious if you have a different type of bill. Bills after this date have a very similar look to dollar bills today. A few more obvious traits would be coloring, repeating serial numbers, or special numbers on the bill.

So how much can these rare dollar bills net you? Well, according to Old Currency Values website, some of the earlier dollars auctioned off went in the hundreds of thousands! Can you imagine, $300,000 for an old dollar bill! A recent 240-piece collection containing a number of historical notes from 1812 to 1923, had them recently surveyed to be worth several millions each. Wow!

How do you check if your dollar has value? Check for unique serial numbers according to the collectors at CoolSerialNumbers.com. The have created a list of the most-wanted serial numbers. Its quite an extensive list so below is a very condensed version and meant to provide an idea of what to look for:

To check out the complete list you can print out this PDF and review it with your dollar bills in hand.

What Do Serial Numbers On A Dollar Bill Actually Mean?

On every dollar bill (rare or not), there is a unique string of 11 numbers and letters that appear twice on the front of each bill. The first letter of the serial number corresponds to the series year (see chart). The second prefix letter identifies the Federal Reserve Bank that issued the note. 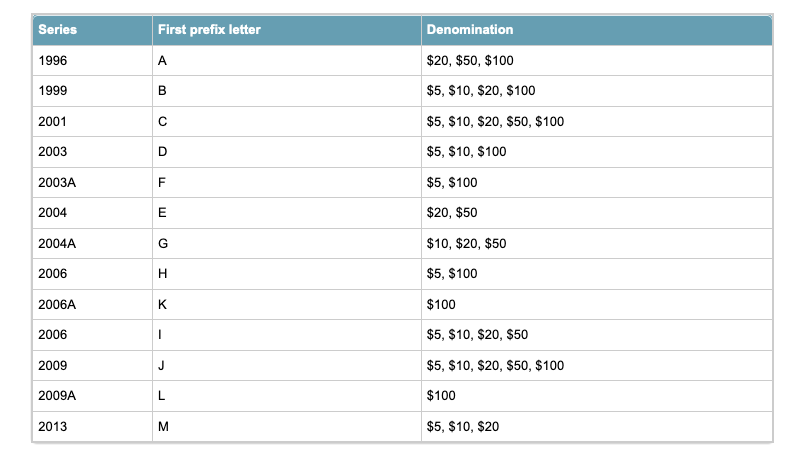 There are 12 Federal Reserve banks in the U.S. The series year doesn’t actually mean that’s when the bill was printed, it just stands for the last time it was updated or even when the Secretary of the Treasury was appointed. Below are the 12 federal Reserve locations and number meanings.

The treasury department uses serial numbers as unique identifiers for every bill that goes out their doors. These help law enforcement officials identify counterfeit notes as well track where bills go. They also help to track quality standards for the notes produced.

Are There Mistakes on Your Bills 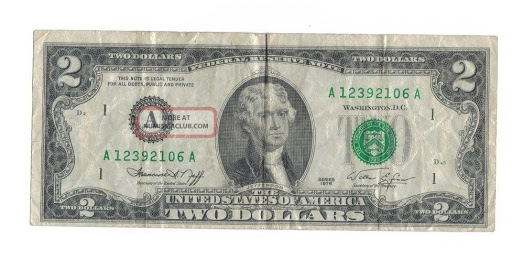 Is it possible the treasury department made a printing error, placement error, or even a flat out mistakes on a bill? Yes, and they are considered acceptable by the government and do not make your dollar worth less, however they can make the bills value even higher! Misprints on dollar bills are noted by a star next to the serial number.

When bills are misprinted, the “error notes” are replaced with star notes because the government doesn’t allow two of the same denomination bills to be made with the same serial number.

An example of a misprint, could include cuts and orientations that are not aligned- as above in the two dollar bill. You will see that the bill itself is not set in the center, but slightly offset. Other examples might things such as serial numbers printed upside down or a bill having a different color seal (yellow, blue, or red). The more obvious the mistake, the more valuable it can be to collectors.

What is not important as important to finding rare dollars is the year. Misprints from a few years ago have the possibility of being the same value or even more-so than older bills with a misprint. It all depends on the misprint itself and obvious factors. Misprints happen all the time all the time, so be on the lookout regularly for these anomalies. Holding onto these types of rare bills won’t increase its value either, so check out what it could be worth and sell it or add it to your own collection!

While some people might have some unique old notes worth a small fortune, most of these misprinted bills are not valued much higher than a few dollars over their printed price. It all depends on the misprint. Bills themselves aren’t meant to last forever, so the likelihood of stumbling upon some really old notes that were actually viable would be a low probability. They are out there, but its not likely that you would find many or enough to actually retire off of.

Everyday, the Federal Reserve places new money into circulation, and takes old, damaged money out. Battered and torn bills that make their way back to banks and the treasury are deemed “unfit currency” and destroyed under a careful eye. Most of this money is recycled and made into new bills to be used until they too are seen as unfit for use. There are probably tons of dollars sent to be destroyed that had high values or unique mistakes, mostly because nobody notices their uniqueness.

Maybe now you will take a closer look at the bill or coin passing from one person to another. Sometimes when doing things so repetitively we don’t take the time to stop and see what is actually in our own hands.

What Do Collectors Do With Rare Bills?

Most people that collect items, do so for the love of the hunt and chase, not to get rich. Getting rich from a collectible is an awesome side effect of the hobby. Many people collected baseball cards of their favorite players back in the day. They would open the packets, chew the gum and trade others for their favorite players. It was the excitement of the day to find your star in a pack. Nobody saved these really knew the high dollar value would be so great 20 years later. But the fact that they did rise in currency has made them even that much more popular today.

Collectors enjoy showing off their finds, whether its a old Babe Ruth baseball card or a 1928 dollar bill. You can find some old currency in museums or even in the treasury itself. A piece of American History lays in each bill printed and coin minted. The value of a dollar may have sure changed over the course of many years, but the hard work it takes to earn one will always be understood.

So, take a few moments and check your old piggy banks for those rare dollar bills. And then look for those collectors willing to pay hundreds, and sometimes even thousands of dollars for it!