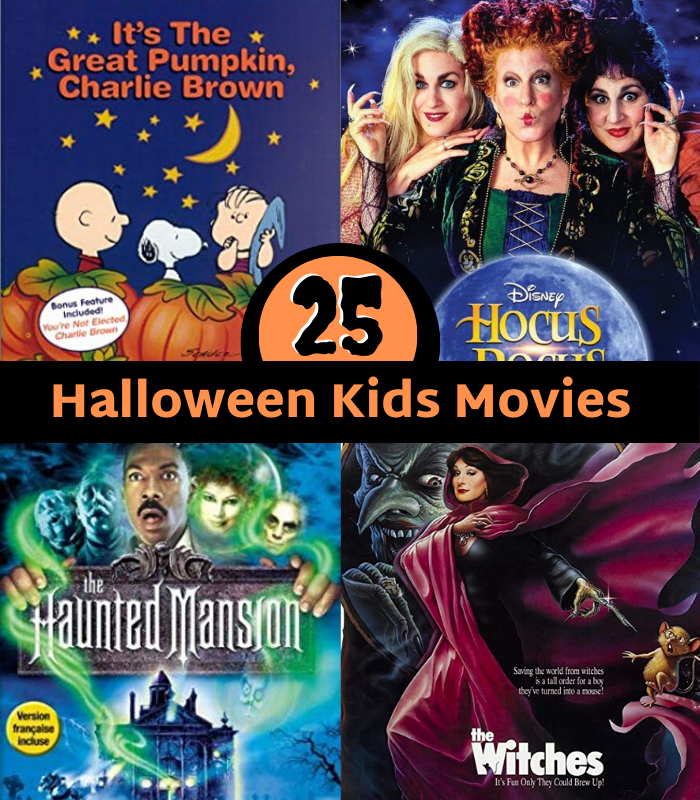 I love the fall time of year with its cooler evenings and gorgeous fall decorations. The kids enjoy heading to the pumpkin patch and sipping on spiced apple cider while picking out pumpkins four times the size of their heads. And of course at night our favorite activities are picking out creative Halloween costumes and watching our favorite kids halloween movies on netflix or amazon prime movies!

Below are our favorite Halloween-themed movies for kids all ages, guaranteed to get everyone in the mood for tricks, treats and fun family time!

2. Halloween is Grinch Night (1977) – This award-winning film is the follow up to How the Grinch Stole Christmas! The menacing Grinch heads back to Whoville during a storm to disrupt Halloween. Leave it to one of the Whoville kids to show him the error of his ways.

3. Casper (1995) – Who could forget the original friendly ghost, Casper, who is spending his time haunting a mansion in Maine until a paranormal specialist arrives eager to communicate with him and his fellow spirits. Things get tricky when Casper falls for the daughter of the unwelcome guest. Rent from Amazon Prime.

4. Monsters Inc. (2001) – Oh those creepy monsters who live under the bed! How do they get so good at scaring kids? They go to Monsters Inc. of course, where they train only the best and scariest. See what happens when two champion “scarers” encounter a precocious little human girl.

5. Pooh’s Heffalump Halloween Movie (2005) – Little Kangaroo Roo and his new best buddy, Lumpy, head out to trick-or-treat and soon find themselves on an adventure to catch the Gobloon before it catches them. Perfect for the little ones! Rent on Amazon for under $3.

7. Curious George: A Halloween Boo Fest (2013) – Curious George teams up with his farm friend Allie to catch No Noggin, a scarecrow with an affinity for kicking off hats. Join George, the Man with the Yellow Hat and the rest of the gang for this Halloween fall fun.

8. Scared Shrekless (2010) – This short film (About 22 min) brings Shrek and all his friends back to compete in a Halloween storytelling contest. The problem? The gang must also spend the night in Lord Farquaad’s haunted castle. Who makes it through the night? Watch and find out!

9. Toy Story of Terror (2014) – After checking into the Sleep Well motel, Woody’s friends start disappearing and nobody is sleeping. Woody gathers his courage and gets to the bottom of the spooky mystery. Buy on Amazon Prime

10. Hotel Transylvania (2012) – Dracula loves his new gig as a hotel owner, and everything is going perfect until a man shows up who is interested in the property. Dracula goes full-on “dad mode” when the man’s son and Dracula’s daughter start falling for each other.

11. Hocus Pocus (1993) – A young girl, two teenagers and a wickedly cursed feline from Salem, Massachusetts accidentally fall into an outrageous adventure on Halloween night after three witch sisters are resurrected and try to doom the town. Another one of our kids halloween movies favorites! Rent on Prime.

12. Beetlejuice (1988) – A recently deceased couple is enjoying their new home until some very real and very obnoxious homeowners move in along with their sweet daughter, Lydia. The couple calls in the service of a rambunctious ghost to help fix the problem which of course makes it just that much worse. Rent on Amazon.

13. The Witches (1990) – While staying at a hotel in England with his grandmother, Luke accidentally spies on a group of witches. He quickly learns the Grand High Witch reveals a plan to turn all children into mice through a magical formula and he must stop her.

14. Tower of Terror (1997): A journalist and his helper investigate a 1939 mystery in which five people vanished from a hotel elevator on Halloween. For decades, their ghosts have remained trapped inside this old run-down building. If you are a fan of the movie you might consider visiting the actual Tower of Terror at Disney!

15. Ghost Busters (1984) – Who you gonna call? This is a classic favorite film about three parapsychology professors who start a spirit-catching business. Slimer the ghost really steals the show!

16. The Haunted Mansion (2003) – An overly busy dad learns important lessons about haunted mansions and spending quality time with his family in this movie inspired by the popular ride at Walt Disney World. Rent on Amazon Prime Video.

17. Frankenweenie (2012) – Frankenweenie tells the tale of a boy who tries a powerful science experiment to bring his beloved dog back from the dead. It works but a bit freaky to all!

18. Nightmare Before Christmas (1993) – Jack Skellington, the pumpkin king of Halloween Town, decides to mix things up with some inspiration and characters from Christmas Town. It doesn’t go exactly as he planned.

19. Halloweentown (1998) – After Marnie learns she is really a witch, her and her friends get some unexpected on the job training as she tries to save her mother, grandmother and the rest of the town from supernatural creatures. (One of my fav kids halloween movies!!) Rent on Amazon Prime.

20. Harry Potter (2001-2011) – Many movies to choose from but they all have that spook factor! With spells, floating tables, sorting hats and tons of adventure, this is a great pick any time of the year. Friends, popcorn, a comfy couch and candy pair well with this popular movie marathon! If you are a huge fan like we are, check out these Harry Potter Gift ideas for friends and family!

21. Monster House (2006) – What do you do when you find out the house next door is actually a living, breathing monster? Three teens find out the hard way, gulp. It teaches them not to adventure to where they shouldn’t.

22. Frankenstein (1974) – A super old school classic that doesn’t get much better. For those preteen and older, this movie is Mel Brooks at his best. This spoof about the grandson of Dr. Victor Von Frankenstein will really have you laughing.

23. The Addams Family (1991) – If your family hasn’t met the Addams family yet, this movie needs to top your list. See what this eccentric crew does when a con artist tries to get the best of them. Watch out! There are lots of tricks up their long, black sleeves. Rent the classic on Amazon Video.

24. Corpse Bride (2005) – Mistaken identity gets ghoulish when a nervous groom unknowingly recites his wedding vows in front of a corpse who comes to life ready to be his wife. Oops!

Grab some popcorn, hot chocolate and cozy up with a warm blanket for movie night tonight! We won’t blame you if you have to cover your eyes a few times with these super fun movies!

Previous Post: « 15 Holiday Food Gift Ideas That Always Get Eaten!
Next Post: Simple Budget Hacks for Anyone to Save Money »