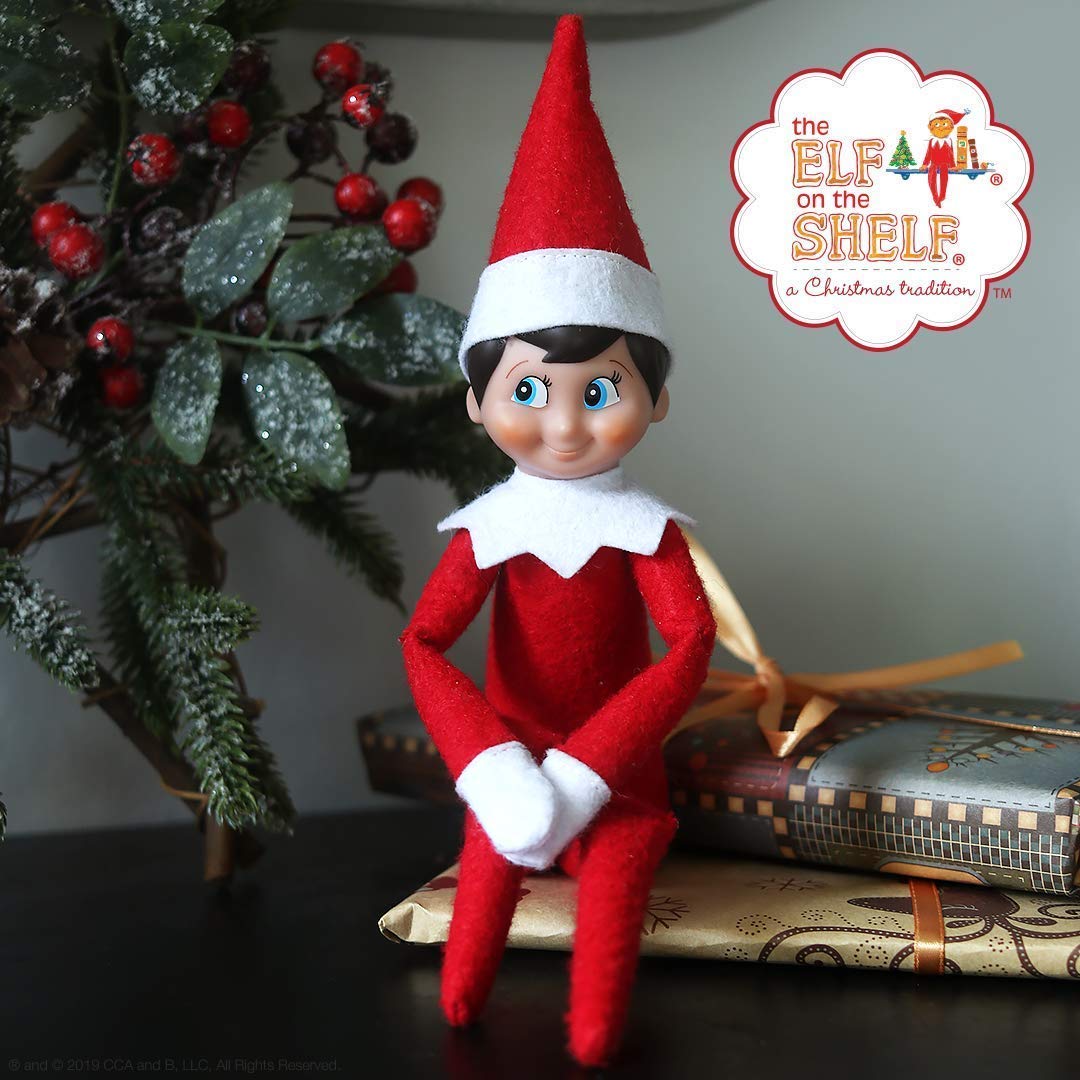 For many of you who might not have known about the fun-filled Christmas tradition called the elf on the shelf, you’ve come to the right place. This article will give you a brief history and background of this greatly loved Christmas tradition that has made children and families from different parts of the world obsessed with it.

The Story Behind the Elf on the Shelf

The elf on the shelf is an old tale that signifies the elf as a watch out to all the kids at home, noting down their behaviors and reporting it to Santa.

The scout elf is said to be sent all the way from the North Pole to check whether the little children are being naughty or nice during the holiday season before Christmas day.

The elf changes its spot in the house every night, which amuses all the little children. And often times finds himself or herself in some mischievous spots! The location of the elf is the first thing they check after waking up in the morning.

Of course, the parents change the location of the elf when they are asleep. However, for the entertainment of the kids, their parents keep this little magic piece a secret.

The Early Origins of the Elf on the Shelf

This Christmas tradition is dated all the way back to the 1970s when two little kids used an elf as a Christmas ornament during their childhood.

The elf started to become more than just an ornament to the children, when their mother started to tell them stories on how the elf would magically fly around and keep an eye on the girls, checking to see if they had been naughty or nice during the day.

This old Christmas tradition grew like wildfire after 2004 once Chanda Bell and her mother Carol Aebersold wrote a book about an elf sent by Santa to watch over the children during Christmas time. The idea of creating a book had a small back-story to it, which involved a lot of effort by Bell.

Bell and her family were going through a rough patch in those years, which involved some financial strains. Her mother was also facing some minor health issues. During all these struggles, Bell found inspiration from her childhood elf and approached her mother to write a story together.

The story was written on the basis of fun rather than a way to make a living from it. After many rejections, Bell and Aebersold finally decided to self-publish the book in 2005. They took many huge financial risks, which involved starting their own publishing line and giving up their old jobs. The risk seemed to be worth it as they have since successfully published over 5000 copies of their book.

Since 2005, the story of the elf on the shelf has spread like wildfire in all homes and on social media platforms.

Growth of the Elf on the Shelf

The elf on the shelf has gradually grown into a worldwide phenomenon. It’s been just twelve years since its official launch and this amazing tradition has been adopted by more than 11 million people all over the world.

Many famous actresses and actors including Jenifer Garner have been seen with an ‘Elf on the Shelf’ box. Bell and Aebersold have also worked toward selling their Elf on the shelf kits online and in bookstores. These are often spotted in local trade shows and markets.

By-Products of the Elf on the Shelf 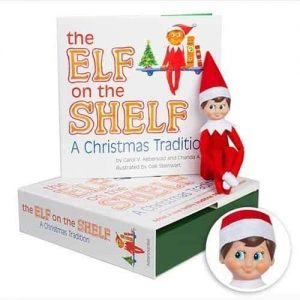 Criticism Faced By the Elf on the Shelf

The Elf on the shelf has been surrounded by many critics because of its over-generalized popularity. Parents, psychologists, and journalists think that the tradition is too over commercialized, which has lead to a high demand from children.

This has caused many kids to be competitive during Christmas instead of just freely enjoying the season. The popular celebration and practice of this festive on social media has also caused a lot of pressure on many people.

Parents feel like they have a huge responsibility of making this whole tradition come to life, which puts a lot of pressure on them.

However, the response of Bell to this criticism made people rethink why we follow these traditions.

This tradition is all just fun and games and is not supposed to be taken seriously.

The simplicity of the tradition is what made it fun for Bell and her sister Pitt, and they want families to feel the same excitement and amusement they felt.

Deeper Meaning of the Elf on the Shelf

It also encourages children to get to sleep on time and wake up early to see fun locations and adventures of the Elf during the night. So, you can use this tradition as a behaving technique for your children.

Commitment to the Tradition

Once you start off your Christmas with this tradition, you will have to follow it every year- just like family holiday rompers. This tradition can get a bit addictive for children as it is sometimes the only thing they look forward to each year.

Of course, you wouldn’t want to disappoint them. So, this tradition should be followed preferably only by families who are willing to put their dedication towards this tradition yearly.

There are two rules that you should follow to keep your kids entertained if you decide to carry out this tradition this year for Christmas:

Why Use Hello from Your Elf or Elf Report Cards?

Report cards make it seem all that much more real for kids as they can see what the elf has written about them during the day or night. It can be used to encourage good behavior, sharing, reward, and just excitement for the fun to come. Even if you don’t own an elf an on the shelf, you can still use these cute Hello from your Elf letters and Elf Report cards!

Get your free fun “Elf on The Shelf Returns” Printable and the “Elf Report Card” and get your Elf all ready for the Holiday fun! Just download and print as many as you need. 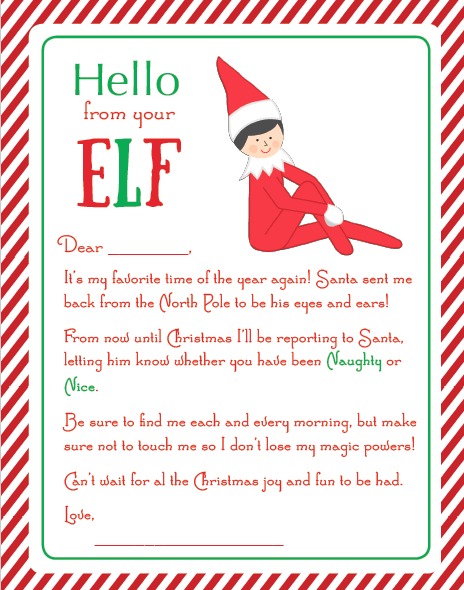 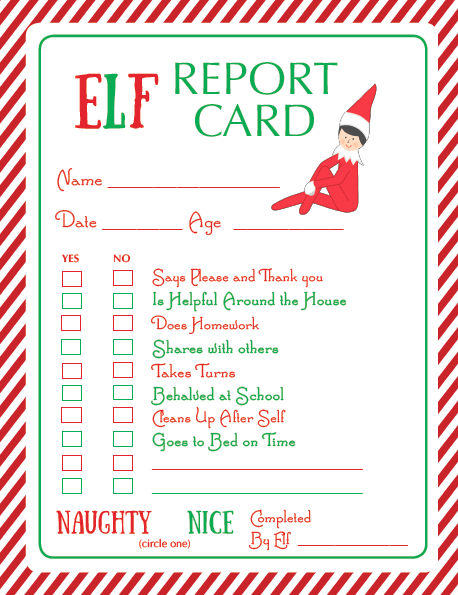 This tradition may sound a bit too over the top, but it’s all about getting your family together and enjoying the beauty and magic of Christmas.

So, if you’re looking for ways to make this coming holiday season exciting, then  you should definitely give Elf on the Shelf a try and if it works out, it can be your little family tradition just like Carol’s children.

Previous Post: « 30 Favorite Recipes for Thanksgiving Side Dishes
Next Post: How to Make Cinnamon Pine Cones That Will Give Your Home That Feel-Good Smell »